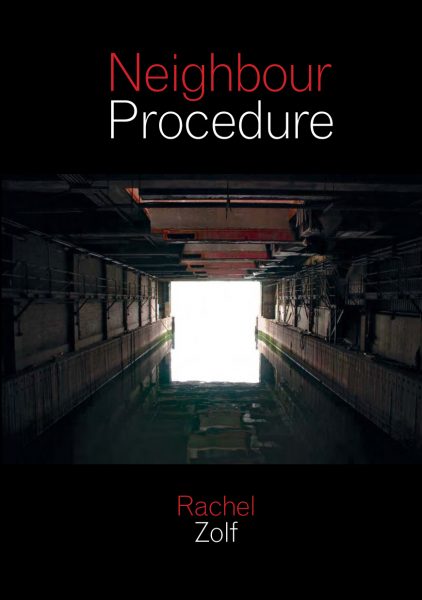 Rachel Zolf’s powerful follow-up to the Trillium Award-winning Human Resources is a virtuoso polyvocal correspondence with the daily news, ancient scripture and contemporary theory that puts the ongoing conﬂict in Israel/Palestine ﬁrmly in the crosshairs. Plucked from a mineﬁeld of competing knowledges, media and public texts, Neighbour Procedure sees Zolf assemble an arsenal of poetic procedures and words borrowed from a cast of unlikely neighbours, including Mark Twain, Dadaist Marcel Janco, 11th-century scholar Ibn Barun, and two women at the gym. The result is a dynamic constellation where humour and horror sit poised at the threshold of ethics and politics.

Read an Excerpt Q&A with Zolf

This is an extraordinary collection of poems, and yet I hesitate in saying this, since something happens to poetry in these pages, so I no longer know what precisely poetry is or can be. In fact, Rachel Zolf brings an incredible range of readings to bear on the poetic line. If there is a mixing of media within these lines, there is also a proliferation of tongues, an effort to let language collide to produce a more acute and anguished experience of war. Israel and Palestine recur in the fits and starts of meditation offered here where language follows unpredictable sequences and finds itself suddenly stuttering in its vowels. There is mourning, rage and some brave and difficult effort to speak across traditions, languages, to avow loss, to expose the colder rationalities of occupation and war, and a linguistic fathoming of the ethics of proximity. This is courageous and moving work that feels like the struggle of a lifetime condensed into potent lines. —Judith Butler

There is a madness in thinking the problem of Israel and Palestine can be thought through or sorted out, a philosophical conundrum or puzzle of language; and there’s a despair in thinking that reason has lost its right, leaving all to violence. In Neighbour Procedure, Zolf chooses madness, but yields to despair her suspicion that reason never had a right—only a discourse of ruins, monuments and counter-monuments to hope. —Benjamin Friedlander

Politics and poetry are a volatile mix. Yes, except that the voices of war and terrorism are themselves defiantly both. Zolf shows us this truth, and so her lyrics s(t)ing, acidly. —George Elliott Clarke

Neighbour Procedure … pack[s] an intellectual punch that reminds us, once again, of the powerhouse generations of innovative feminist poets that continually challenge and transform our understanding of what poetic texts can do. —T.L. Cowan